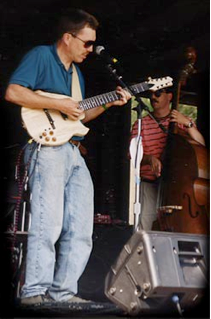 Neil Lamb was born Brunswick, Maine in 1950 and began piano lessons at the age of 10. After seeing the Beatles on the Ed Sullivan show, he switched to the guitar and has never looked back.

In 1973 he earned a B.A. in music at the University of York, Heslington, England . There he studied modern composition with well known music author and composer Wilfrid Mellers, and Pulitzer Prize winning composer Bernard Rands. While in England, he studied briefly with London guitarist Derek Bailey, whose musical aesthetic has heavily influenced the New York free jazz scene. Bailey premiered Lamb’s “Heartspace”, an original work for solo guitar, at the University of York. During the early 1970’s Lamb was fully immersed in the free jazz scene performing throughout England in a jazz trio with avant-garde pianist Steve Beresford and drummer Dave Herzfeld.

When he returned to the US, Lamb shifted focus and began studying the 20th century mainstream jazz masters . He concentrated on solo guitar, discovering seven string pioneer George Van Eps in the process, and developing his own music from there. He has combined his varied experiences, which include contemporary classical techniques, free-form improvisation, Americana, and traditional jazz with a dash of rock & roll and a pinch of flamenco, to create a chord melody style that is rhythmic, lyrical and with just a touch of quirkiness to continually surprise the listener . Recently, he started formal voice studies, and now, when the setting is appropriate, adds vocals to his guitar programs.

Lamb is a prolific composer. His discography includes CDs of original compositions: Sparkling Holiday, Instant Movies, Reach for the Light , and New Tunes for Jazz Guitar, as well as collections of jazz standards: Life Goes On and Live At The Down-East Restaurant.

Since his early years Lamb has studied recording, inspired in part by his participation, as recording assistant , on the Living Room Tapes : duets by legendary guitarist Lenny Breau and clarinetist Brad Terry. In his private recording studio he currently divides his time between composing, and working on projects for other musicians.

In addition to his solo and recording work, he also serves as accompanist for vocalist Julie Thompson in Julie’s High Standards, partners with 6 string guitarist Dave Lawlor in the Lambo Law Guitar Duet , and holds down the guitar chair in the Portland Maine based Mainestream Jazzmasters sextet. 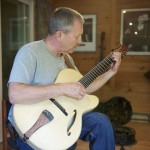 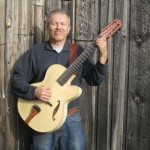 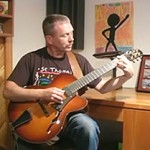 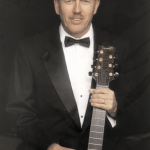